When I was little I loved Sooty - well the Sooty show that is. I didn't actually like Sooty himself as I thought he was a bit of a goody two shoes sneak all too ready to get Sweep into trouble. I adored Sweep - he was cheeky and impish and could be quite naughty and I loved the way his squeak sounded when he laughed. I didn't like the way Sooty took advantage of his slightly dim nature and Sue - well she was just a bit too high pitched really and a bit of a suck up to Mr (Matthew) Corbett so she got on my nerves too. I was also quite fond of Spike the dog.

Some years ago I went to the Sooty Museum in Shipley (sadly no more) and it was a wonderful meander down Memory Lane - there were videos of proper old black and white Sooty shows with Mr Corbett Senior in charge of the mayhem, as well as sets and props. I spent ages happily wandering about though my back did ache after a while as it was really designed for children so everything was a bit lower and I had to stoop to see everything.

One of the toys I still have from being little is my Sweep and he is quite tatty, bit manky looking and misshapen but I adore him. Plus if you press his tummy he still squeaks!! No mean feat considering he has been so well loved and must be at least 40 years old.


Here he is in all his slightly faded and grubby glory :-) 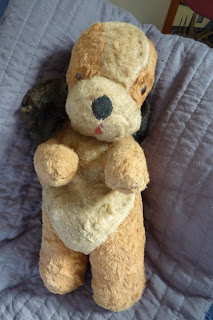 I have seen the latest Sooty incarnation - well the episode that featured John Shuttleworth that is and that was funny , though the new man in charge of Sweep et al wears very heavy foundation and I don't think I could sit through the whole series. It was far too noisy.

But I could sit in front of this (almost) all day and be utterly entranced - this is the one that can be found on  front at Cleethorpes and another fully restored one can be found in the Vintage Arcade on the pier in Southport. In Cleethorpes you put in 20p and they dance and play along to Buddy Holly and The Crickets and in Southport they dance and play along to old nursery rhymes like Baa Baa Black Sheep and Pop Goes The Weasel. The one in Cleethorpes is full of dust and held together with sellotape but the one in Southport is much more pristine - still worn but not quite as manky and operated by a big old golden penny. And best of all when they finish playing a tune in Southport Harry Corbett himself says in good old fashioned Sooty style - 'bye bye everybody, bye bye'. 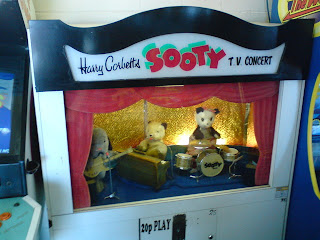 The vintage arcade in Southport has all sorts of gems and if you're ever near there or Cleethorpes I urge you to go and seek them out as they are the best nostalgic fun you can have for pennies - plus you can marvel at Sue's dedication to her drumming in Cleethorpes as she doesn't actually hold the sticks - she has had them grafted into her arms - now that is dedication for you. But there must have been artistic differences within the band though as in Southport she's been shifted from the drums to the piano and Sooty is on the drums and Sweep's guitar has been replaced by a saxophone. Here is Sweep in all his saxophonic glory - 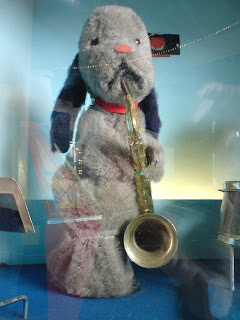 I've just noticed that Sweep in both Cleethorpes and Southport is grey with black ears whereas mine is two shades of brown with black ears - I never noticed this when I was little as we only had a black and white telly - but now I'm looking at him and wondering if my beloved Sooty who I've had for years is in fact a knock off version......
Oh and if you know where there are any other Sooty TV Concert machines please let me know as I'd love to visit all the ones left I've heard a rumour there might be one in Southend but if anyone could verify that for me before I set off to try and find it that would be aces.Ta.