There are lots of things I love about xmas and lots of things I loathe about it too. One of the things that brings back the excitement and wonder of xmas for me are the smells of xmas. Xmas had lots of smells - most excitingly there was the new plastic toy smell, a particularly pungent plasticy smell which I can sometimes get a nostalgic waft of when buying a beachball or other inflatable bit of frippery at the seaside. It was strongest with a doll and pram set and nurses dressing up outfit I got one year. Blissful.

There's also the proustian delight of a slight smell of scorch which comes from having a Nanna who didn't agree with the maxim less is more when it came to xmas decorations, her tree would be choc full on every branch with various types of decorations  - baubles, sleighs, various nativity characters left over from lost nativity sets, mini crackers, fairys and of course numerous strings of fairy lights and all those naked bulbs too close to to the multiple strands of tinsel often got a bit hot and gave off a slight smell of scorch if you got close enough.

Of course you had to get close enough as if you were me you trying to prefect the habit of stealing the chocolate decorations off the tree (never understood how they didn't melt) gently opening the tin foil wrapping, stealthily eating the chocolate and then closing the wrapping back up and putting it back on the tree empty. A tricky feat but one which I'm proud to say I managed more than once - plus the trick was to take them from round the back of the tree where their misshapenness was less likely to be noticed and by the time they taken down on Jan 6th everyone was sick of the sight of them and so didn't care thieves with tricky fingers had been at work.

My uncle swore he could hear the tree -an artificial silver tinsel one actually groaning under the weight of xmas tat on it's branches. They weren't colour coordinated or themed nor did they get replaced every year with the latest trendier aspirational styles, if anything they just got added to. The ceiling was also full of paper lanterns, paper chains and xmas cards were strung along striped string by way of tiny little plastic pegs and even the gentlest shut of the door could bring them all crashing to the ground in an instant which always led to much muttering and occasional bouts of swearing.

The other smell which always makes me think of xmas is brandy or whiskey - my Nanna would make two of three xmas cakes and all would be decorated in a similar style to the tree - ie no thought for coordination or scale so the plastic Father Xmas figure would be the same size as a plastic Robin and little plastic yule log. And we all remember the year her elbow jogged as she was mixing the icing and put too much water in and Grandad was sent to the phone box at the end of the road* with instructions to ring all family members and ask them to bring as many boxes of icing sugar as they could carry. Prior to the icing she would have been feeding the cakes with brandy or whiskey - via a knitting or crochet needle (wiped of course) every few days so that after even a slither of a slice of her cake you'd feel a bit squiffy. It wasn't safe to eat it and drive.

What are your smells of xmas?

* this of course was in the days when not everyone had a phone in their house let alone a mobile device that can probably time travel or something, - this comment is brought to you by someone who doesn't have a smartphone but a 7 year old nokia handset that does nothing fancier than enable calls and texts.....
Posted by ladylugosi at 11:30 No comments:

I don't have a kindle or other branded electronic reading device, I find it difficult to read anything longer than an article on a screen. I like books, well actually that's a bit of an understatement I ADORE books - not just their contents and their ability to transport me to other times and places or to teach me but also their physical qualities - the feel of the paper,the dust jacket, the smell of years of undisturbed delicious mustiness.

But what I also love about books and secondhand books in particular is finding something inside them like an to do list (who knows whether or not the reader ever finished their list) or an old shopping list or a lovely old bookmark or best of all - an old photograph.

I was having a mooch round Hebden Bridge the other week and went to the Antiques Centre and bought a copy of Revenge of the Middle Aged Woman by Elizabeth Buchan not for the book but for the photograph inside it. 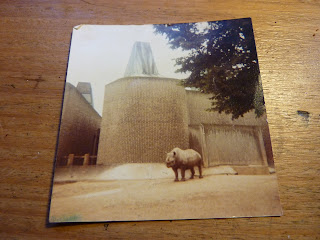 A lovely proper seventies snap (looks like the ones I used to take on my kodak instamatic ) of a rhino house somewhere - I love the slightly washed out colour and fixed focus. I'm not sure which zoo it is but if anyone could tell me I'd be very grateful.

I'd also love to hear about what lovely or not so lovely things you've found in books - and yes I know kindly type readers are light, and you can read them in the dark but they just don't have the romance for me and nor do you find ace pics like this in them.
Posted by ladylugosi at 07:09 1 comment: