Another in the old postcard series 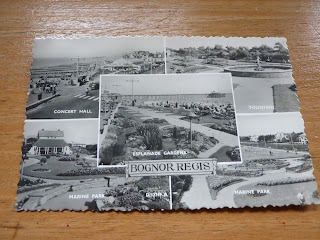 It was posted on 15 August 1960 at 4pm and was sent to Mr and Mrs Kirk in Kimberley from Lily and Eric who on holiday in the area. Their message in blue biro reads:


Dear Friends
As you will see we have moved onto Bognor but it's not as nice as Southsea, still it's better than work and a change. Eric says there is a marvellous Butlins camp here. Weather mixed but when the sun comes out it's really hot.
All the best
Lily and Eric.

I wonder what work Eric did and if Lily worked too and if they visited the Butlins camp and what attraction did Southsea have that made it better than Bognor?
Posted by ladylugosi at 04:59 No comments:

Put my pics up at Multiple Choice this morning (it's about 2 doors down from the job centre and kind of directly opposite the bus station and the police station and diagonally opposite the Playhouse) and they along with lots of other lovely arty things will be on show for the next couple of weeks, weekdays 12-5pm - come on down :-)

This is another Pop Up Gallery as part of the Love Arts Leeds Festival - for details of all the things on as part of the festival - see here http://loveartsleeds.co.uk/
Posted by ladylugosi at 08:08 No comments:

It's my niece's first birthday tomorrow so I've knitted her a kind of ghost puppet type thing.
Hope she likes it, mind you if she doesn't I know her older brother will as his favourite cartoon is Scooby Doo :-) though when he grows up he wants to be a Power Ranger. 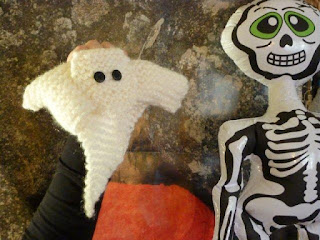 Posted by ladylugosi at 01:49 No comments:

Super excited to be part of this - got some work in The Light and will have some in the Pop Up Gallery at Multiple Choice too - well I will have if I get my finger out and get it printed up and framed...Busy,busy,busy....