The Incident of the Distinterment or Research for Arts Sake

I was one of the lucky artists to be picked for the Place and Memory Project (details here) and have been busy beavering away on it since June - which is partly why I've been so quiet on here.

It's not long now til the exhibition opens on October 12th at Trinity Arts Centre on Boar Lane in Leeds and I am putting the finishing touches to the pieces I will be showing - both of which have taken me beyond my usual comfort zone of taking pictures on film or digital, posting them online and occasionally getting them printed and putting them on show through the Arts and Minds Network. I won't reveal what form they have taken yet or at least until the exhibition opens and then you'll be able to see them for yourself but in the meantime here is an explanation of what I've been up to for the past few weeks. 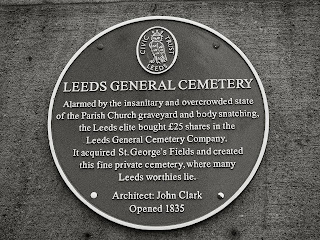 When I picked St George’s Field as my place I didn’t know quite how engrossed I’d get in researching its history  or the intriguing facts I would find out along the way, places I would visit or that it would even make me think about going back to university to do an MA.

You can find a brief overview of the history of the site online – it opened as a burial ground in 1835, began to go into decline in the 1930s and there were 93,556 interments carried out there before its closure in 1969. This also tantalisingly reveals that there was a thesis written about the history of the company behind the burial ground held at Leeds University and I thought well I’ll just read that.

But reading it meant going back to the university – I’d not had a happy time when I was a student there a few years ago, and I felt quite anxious getting in touch with them to make arrangements to read it but my desire to find out a bit more was stronger than my anxiety. Plus the staff at the university library were extremely helpful and friendly. So my anxiety was quickly replaced by a refound love of the university library and its beautiful wooden oasis of cool and calm amongst everyday bustle. 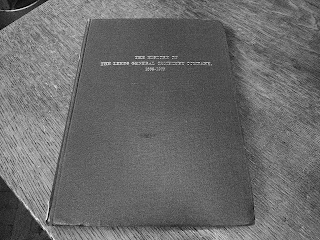 I found it all a bit too austere and imposing when I was a student there but now it is one of my favourite places to go, away from distraction and noise, where you have permission to do nothing but absorb yourself in books for hours. Books that have a real physical presence, weight, texture, smell and corporeality that is so lacking in pixels on a screen.

The thesis was green cloth bound, was typed, had real photographs glued in it, tippexed out mistakes and biro-ed in amendments. It took a couple of  visits to read it in full but it also in turn made me seek out other books, disappearing deep into the far recesses of the library to seek out such gems as The Victorian Celebration of Death by JS Curl, and Lou Taylor’s Mourning Dress A Costume and Social History and Sylvia Barnards excellent history of Beckett Street Cemetery ‘To Prove I’m Not Forgot’ which is full of amazing snippets of the history and growth of Leeds, as well as an absorbing history of the country’s first municipal cemetery.

This in turn made me want to see mourning dress itself and I made an appointment with the Museum Discovery Centre and spent an hour with their costume curator looking at clothes and jewellery, beautiful intricately laid out remembrance brooches with daguerreotypes and bracelets made with hair and I discovered that the origins of some of todays department stores is as Masion De Noires – the one stop shop for all you and your servants mourning costume needs. And where Fibre is now on Lower Briggate used to be the headquarters of J &R Hardwick, a Funeral Equipage Centre which branched out into undertaking as well in the late 1840’s.

I also emailed the head of library services to see if I could see inside what was the non denominational Chapel and is now a university bookstore, they very kindly gave me access but alas there is nothing of Victorian origin left inside – no trace of the redecorations made in 1857 and 1884 nor of the stove fitted to ward off the cold and damp in 1857.

A visit to Leeds Central Library Family History Section rewarded me with what I have been desperate to find – a photograph of what the cemetery looked like before the monuments were moved and cleared in 1968 in an old copy of Maurice Beresford’s Walks Round Red Brick. I’ve been hunting high and low to find photographs of what it used to look like, Leodis has a couple of pics but they’re of the old entrance road, not taken inside the cemetery itself.

They also told me that if you have a Leeds Library card you can access part of the British Newspaper Database online – where you can search copies of the Leeds Mercury from the 1800’s and encounter amazing Victorian adverts for cure all medicinal pills and potions, read editorials on what it was like at St George’s Field prior to the first interment in July 1835 and read sad tales of warrants issued for men who have abandoned their wives and the wives have been forced to go to the workhouse.

Best of all though this lead me to full report on ‘the gross incident of the disinterment case at Quarry Hill’ which was mentioned in passing in a single line in the thesis but which I found out the full details on in the January 1841 edition of the Leeds Mercury and led to ‘unmitigated disgust within the town’. I could of course tell you all of the details or you could look it up on the newspaper database yourself…… 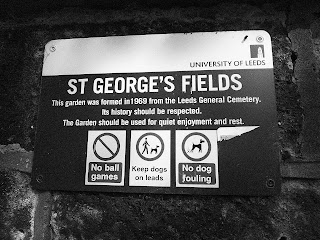 All of this research has given me a fuller picture of the history of the city where I live, a better appreciation of local historical resources, a renewed love of libraries, and more confidence when asking for access to sites and perhaps most importantly it has informed the work I’ve been doing for the Place and Memory Exhibition.

Come down and see it for yourself along with the work from the other Place and Memory Artists - from 12th October 10am til 3pm Monday to Saturday until 19th October,  Holy Trinity Church, Boar Lane, Leeds  - free admission.
Posted by ladylugosi at 08:22 No comments: