(yet) Another In The Old Postcard Series 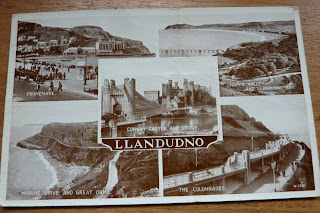 It's a long time since I've been to Lladudno, must be over twenty years ago. I don't remember much of it except it was exactly the kind of slightly past its best seaside place that I love. I do remember a lovely old secondhand bookshop which had lots of books which I couldn't afford at the time as I was absolutely skint but which I would happily have sold my soul for. I wonder if the bookshop is still there. Lladudno has been on my list of places to revisit for a long time. My grandparents used to go there a lot - along with the Isle of Man and Blackpool it was one of their favourite places to go to. I wonder if they walked along the Colonnades pictured in the postcard and if they are still there and still recognisable. I have vague memories of walking along the Promenade and having a go on the seaside treat of a firefighting tableau that you put money in and then aim a massive water pistol at characters mouths. I can't help but wonder if Happy Valley is happy? I did climb part of the Great Orme on a school trip once, I was wearing an orange kagool of which I was inordinately proud of at the time, no idea why. I've moved on to umbrellas now and would rather get wet than wear a kagool - even if they don't turn inside out in the wind - one of my biggest gripes about 'sensible outdoor gear' is that it is mostly available in brown and navy, two colours I've banned from my wardrobe (unless you count the brown in leopardprint that is) and whilst it may be water and wind proof it is also unbelievably dreary. Why can't it be in black or red or purple - which are of course the best colours.*

But I digress - something I often do and something which was occasionally commented on in my school report, think 'prone to going off at a tangent' was the phrase used. I've been to Conway Castle too - a rather magnificent building. I really must go back.

This postcard was posted on 10th September 1958 to a Miss V Moss who lived in Walsall. It was signed G.
It reads:
Thank you for letter this am, am glad to know you are alright and Whisky too.Sorry you did not get my PC til Tuesday. I posted early Sunday AM so you should have had it Monday.
Having a lovely time and yesterday and today have been glorious and cloudless, v lovely. Monday v wet AM but fine later. Would you be alright if I stayed til Monday next? Aunty would like to stay and everyone says better for travelling, so if you would be alright, arrive the usual time just before 6 o'c? Going to see Sallie tomorrow. Lots of love to you and Whisky.Nearly living on the Par?
PS Pretend you are on holiday too - get out a bit.

I wonder what V stands for - Veronica possibly, I wonder what G stands for and what kind of creature Whisky was - am presuming it's a dog but it could have been a pony or even a cat. I wonder if Aunty did stay and if it was a successful visit and if V did get out more. I don't know what Par means either - a place or a status, not sure.

*pedants can feel free to point out that black isn't a colour but rather the absence of colour.
Posted by ladylugosi at 08:29