Another In The Series of Old Postcards and a rant about...

Regular readers will know I love old postcards - either in sepia,black and white or in lovely over the top hand tinted colour loveliness like this one. 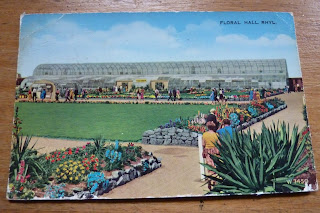 It's a bit tatty round the edges but it is also beautiful. It shows the Floral Hall at Rhyl which the tinternet tells me opened in May 1959 at a cost of £21,000. It was visited by the Duke and Duchess of Gloucester (whoever they were) in 1960 and was thereafter known as the Royal Floral Hall. It was then converted into a butterfly garden but alas this didn't stop it from being demolished in the early 1990's and it is no more. It seems the glass it was made out of wasn't thick enough to comply with new safety regulations and it would have cost too much to get the glass up to scratch.

On the back is a message to Mrs Lowe who lived in Norwich which states that they are having a nice time and the weather is nice too and that they hope all is well. I'm being a bit vague as I'm afraid I can't read the signature nor can I can read the whole postmark, It was definitely posted on 17 August but half of the year bit is missing but it looks like it could be 1960. The stamp is a lovely red with a picture of the young Queenie on it and it cost 2 and 1/2d. Whatever that is in new money I'm guessing it's nothing near the postal prices of today.

You can probably also guess from my less than reverent tone of describing the royal family that I very little time for them. I don't, I find it utterly gobsmacking that we live in the 21st century yet we still as a country have a monarchy. I like people because of their talent or skills not because they were born into a particular position. I also cannot bear the fawning forelock tugging tone of most of the media reporting about them. For goodness sake they are just people - albeit ridiculously over privileged ones who live in a goldfish bowl.