Another In The Old Postcard Series 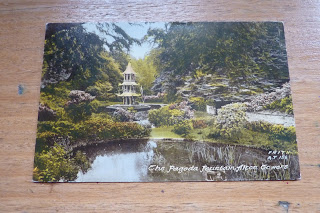 This postcard is of The Pagoda Fountain at Alton Towers, not sure when it was taken but a quick tinternet search informs me it is still there which makes me want to go and see it. But otherwise I have no interest in going to Alton Towers as I'm not that keen on rides really and I certainly don't want to go on something that makes you go upside down and makes you feel like your insides are going to drop out. The Mouse at Blackpool Pleasure Gardens is as scarey as I've ever got and that was quite scarey and bouncy enough for me. I quite like the old style Merry Go Rounds though and those swings you sit in that go outwards. I'm not sure yet if I'll go on the Leeds Observation Wheel as it looks a bit too wobbly for me - though a chum who has been on it assures me it's okay as long as you don't move around in your little capsule. Hmm - I'm not convinced.

But back to the postcard it is that lovely muted oldy worldy colour that I adore - it must have been hand tinted as this was well before the days of Photoshop and the Pagoda looks suspiciously yellow or maybe they used filters when taking photographs at F Frith and Co Ltd who were based in Reigate. The tinternet tells me this company was founded by Francis Frith in 1859 and was the worlds first specialist photographic publisher. He embarked on a mission to photograph all the towns and villages in Britain, had to hire people to help him do so and became so successful that at one point his postcards were sold in over 2,000 shops in Britain.  He died in 1898 but the firm he founded continued without him until it closed in 1970. His incredible archive was bought by Rothmans and then by John Buck and it is now called the  Francis Frith Collection and you can look at it here  and buy things should you so desire. My postcard is there - albeit in black and white and it seems it was taken in 1955. So it must have been handtinted for publication.

The date on this postcard is obscured but the stamp is a brown 2d one which the tinternet tells me was in use between 1957 and 1959 and it was sent to Mrs someone (can't read the handwriting) who lived at Sunnyside in Jersey. The message reads:

Monday
Dear Win
Arrived here O K after lovely trip in the coach, went to this place yesterday, a friend has lent us a car, hope to go to Dove-Dale tomorrow.
Hope you are all well.
Catherine & Geoffrey sent their love
Nora (I think it's Nora - could also be Dora - handwriting isn't very clear)

I wonder if they did get to Dove-Dale after all.
Posted by ladylugosi at 04:11