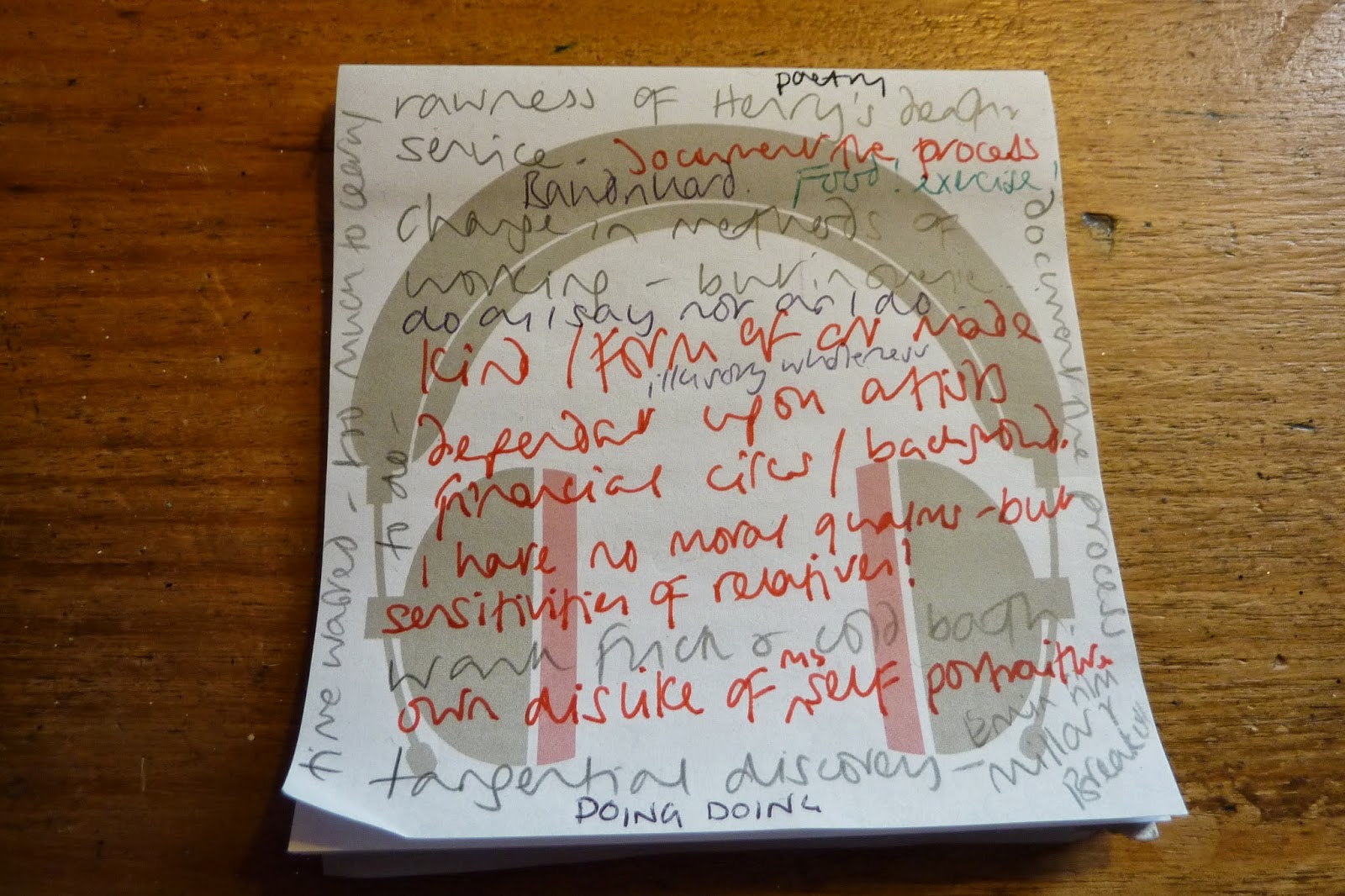 I've been busy these last few days - both in terms of doing and in terms of thinking plus it has been an emotional time too. A week last Saturday it was the moving and beautiful memorial service for my friend Henry Tickner who died just over a year ago. To say I miss him lots is an understatement - he was the only other person I know who liked black and white silent german films as much as me and his knowledge of classical music was (amongst my chums anyway) unequalled and I would have loved to have talked to him about this art and cultural studies malarkey as I'm sure he'd have provided both valuable insight and a useful sounding board. Plus we both loved scumming it at the Olympic Cafe opposite the Corn Exchange as their spam fritters are the best in Leeds (if not the only ones left in Leeds thanks to the rise of corporate crap coffee shops or hipster central places...)

Plus it was mine and my husbands 6th wedding anniversary and we have had a fantastic weekend away enjoying the wilds of Cleethorpes - lovely food in a french restaurant, long walks along the salt marshes watching the tankers in the Humber and wondering what it would be like on one of the Humber forts, playing the twopenny falls and I won a lolly, having our picture taken by a disembodied american sounding Van Gogh Studio Picture Booth and seeing a very good amateur production of The Strange Case of Dr Jeckyll and Mr Hyde and of course visiting one of Cleethorpes victorian cemeteries (the one on Beacon Avenue) and last but not least having ice cream in the bitterly cold wind on the front....and of course taking lots of photographs and in an somewhat unusual departure for me in COLOUR as I wanted to capture midwinter bleak and thought that would be better done in colour and having had the pictures developed I can say it has.

But I've also been thinking about the comfort of ritual and why we do what we do when someone dies, and what the apparent social niceties are surrounding death and I am still working out how to incorporate this into my artwork in a coherent manner. As ever - lots of food for thought for me......

I also took part in the Cultural Heritage Show and Tell event at Leeds Museum and it was good practice for me to make a powerpoint presentation in front of (mostly) strangers but there was one friendly face from the MA course and my husband and chum Penny also came along to give me moral support - though the glass of wine beforehand also helped. It seemed to go down well as I got a couple of offers from people who would like to model for me as faux victorian widows or corpses and the offer of a perusal of a collection of condolence letters (albeit from the 1930's but am sure they will still be very interesting and it'll be interesting to see what habits and social norms from the victorian era were still in effect then) and the contact details for the chap in charge of the anatomical specimens at Leeds Medical School.....and also at the risk of sounding big headed my slides looked the best in terms of design and layout - but then as I was the only artist presenting it would have been a poor show if they hadn't really.

I said I'd been doing lots more doing - not least because we had to take some work into college last week for a 'silent crit' which is where the artist says nothing but listens to what others are saying about the work and the way we did it was to not make any response or explanation for at least 10 minutes. It was a bit nerve-wracking but also really interesting as it's amazing to hear what others see in your work which you don't and also to find out what others are up to and what their motivations are. Anyway my doing last week was mostly along these lines - 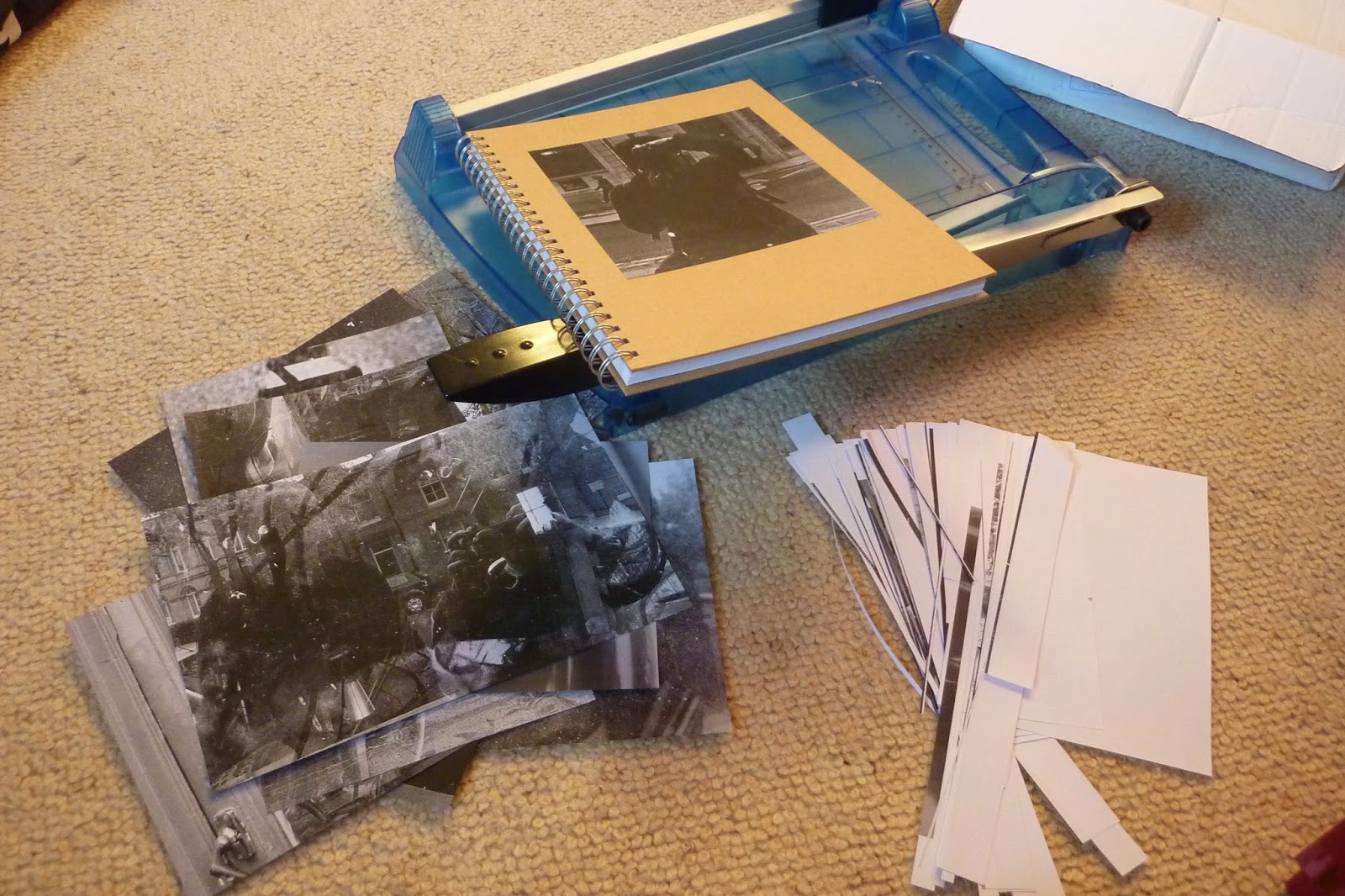 trimming up pictures and gluing them into a notebook somewhat self aggrandisingly covered with a reflection self portrait - reflections are a recurring motif in my work, as I don't like being in pictures or having my picture taken but feel much more comfortable taking them myself - ideally in a dirty window.


But I also take lots of other reflection style photos too. I did some research into reflections and portraits and I must dig it out so I can refresh my memory of it.


This week it's a socratic crit format - and I need to take in something else so I am going to take in my initial copies of some dead flower portraits I am working on, and they look like this at the moment: 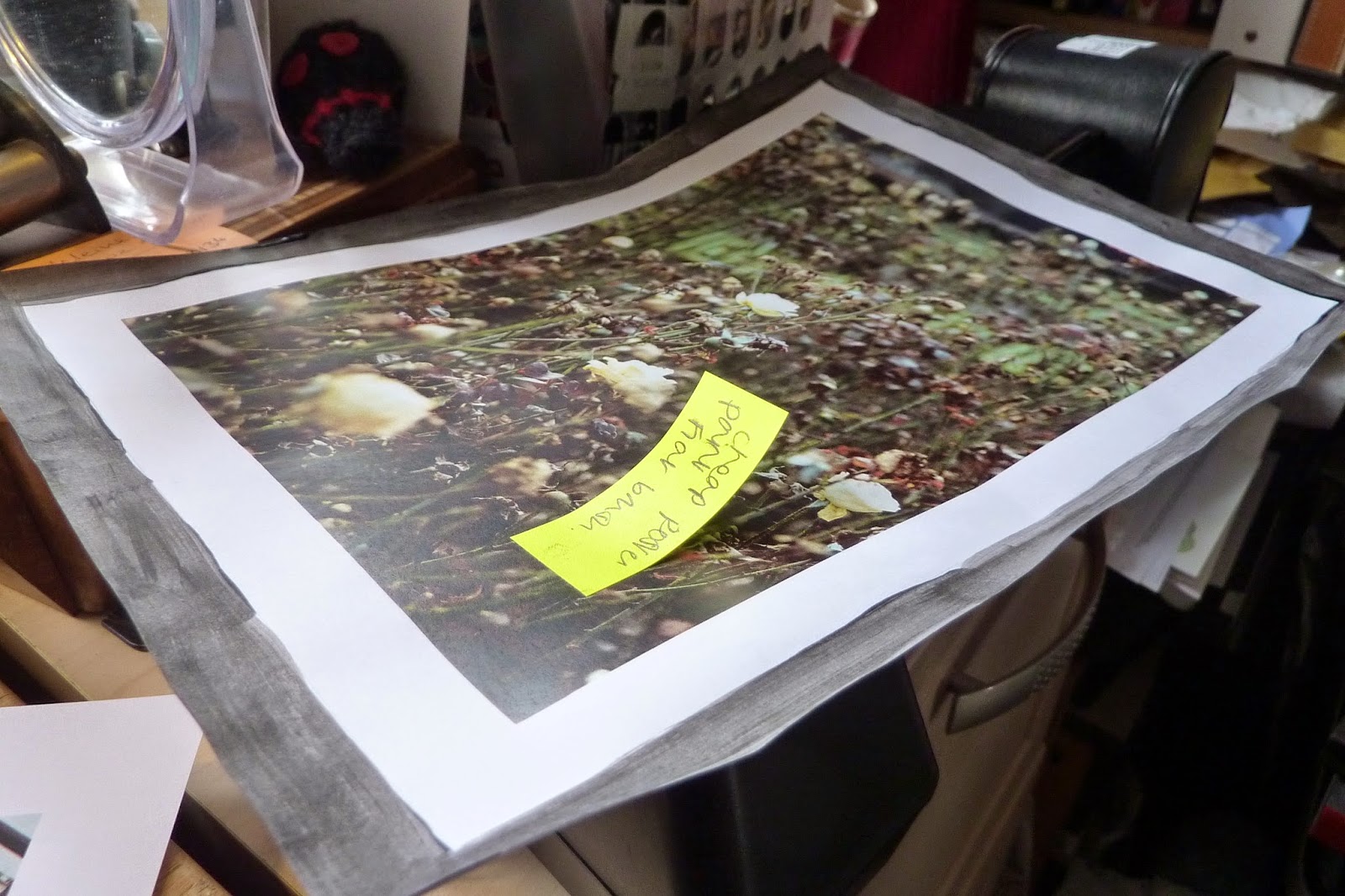 What else do I need to cover from my badly written post it note....well I've been trying to get to grips with some Baudrillard and am still halfway through an introductory guide which is providing much food for thought and interest, and rereading the feedback for the two assignments I handed in before xmas which thankfully I got good marks for - a massive relief as it has been so long since I did anything academic and it was good to realise I was and am jumping the academic hoops correctly...so far that is.

I also went on a gallery tour of Leeds Art Gallery which made me look anew at my favourite victorian paintings in the Ziff room - I need to learn to really look at paintings slowly and carefully and not just immediately think of how the artist made a piece of work as opposed to why and how the kind of art an artist makes may also depend upon such straightforward practicalities as how much the artist could afford for materials at the time.

I've also got a new found respect for Tracey Emin after looking at her film about her growing up in Margate and love of disco dancing and Jeremy Millar's self portrait of himself as a drowned washed up corpse. Fascinating thought provoking stuff. I am also really enjoying the work of Ian Breakwell and his book Seeing In The Dark featuring people's memories of cinemas is an absolute joy.

Also on my post it note are the phrases 'tangential discovery' and 'wank flick and a cold bath' and I have no idea what the latter of those pertains to, except it's making me chuckle. There's also a note about moral qualms - as in I would have no moral qualms about showing a chums human remains (this is of course with their full permission in advance) but what about the feelings of their relatives? should they be taken into account to?

I am slightly changing the way I work - though still research and photography based and in muted almost b+w colour but as I am increasingly mindful that I have so much to do and little time in which to do it, I am trying to switch off social media whilst I'm working so I don't get distracted by it and it's mostly working as is my habit of getting up and getting washed and dressed straight away and then putting the computer on and not the other way round.....still not quite worked out how to fit in more exercise though and I really need to get back into a decent gym habit too but for the time being this week is going to consist of lots more reading, more sewing, more gluing, a tutorial with my personal tutor and some film watching. 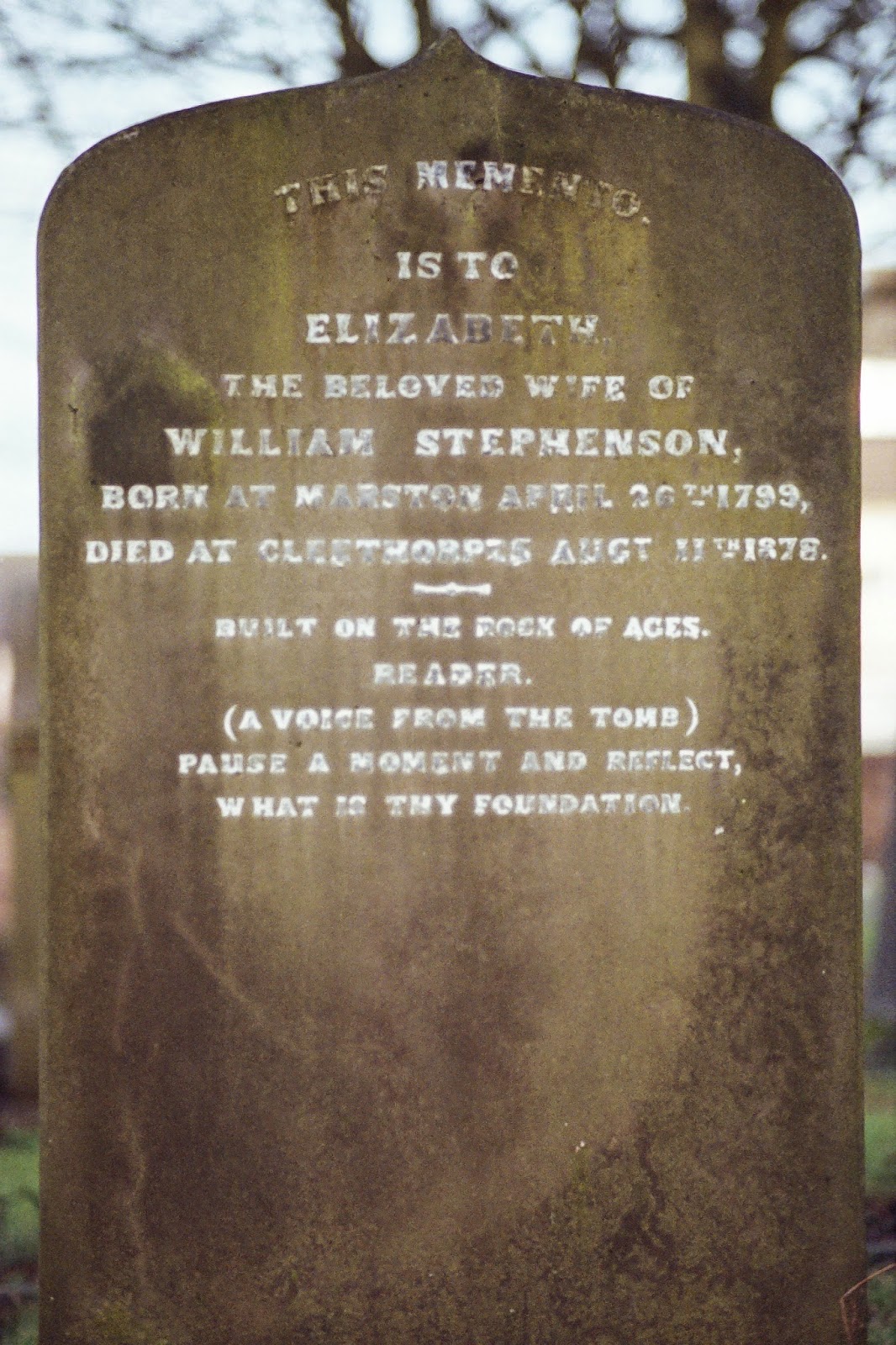 And last but not least my fave grave from Cleethorpes in which a voice from the tomb no less exhorts us to examine our foundations which is more or less exactly what I'm doing.......

edited to add - the phrase 'wank and a cold bath' was in response to my post on Farcebook (delieberate sp) in which I said I'd watched a Frank Langella version of Dracula (it's beautiful to look at in places but otherwise dreadful so don't bother unless you want to see vampire finding horses and a Dracula with v Billy Boufant hair) and a chum told me of how she'd sagged off school to see it a cinema that usually showed 'mucky films' and a couple of people in the queue had bags with green towels in them....my increasingly poor memory is getting to be a bit of a concern....