In 1833 various leading Leeds businessmen got together and bought the land that became Woodhouse Cemetery and has now reverted to its original name of St George's Fields. They saw a viable business opportunity and a way of breaking the stranglehold of the established church on burial facilities by offering places for a similar price in a purpose built brand new burial ground free from the taint of already occupied graves.

On the 26th December 1833 work began on the tree planting and the boundary walls - they were to be built at a height of 12 foot and at a cost of £1,169. The grounds were never consecrated so it could be used by any religion or none though in practice it was most popular with non conformist christians.

Prior to this there had been a competition to design the cemetery buildings which attracted 17 entrants from all over the country. J Clark an architect from Leeds was the winner. His brief was to design buildings of 'suitable dignity and repose' and also to create a 'place of edification for the living' as the victorians were very keen that cemeteries weren't just about paying respects to the dead.

Hence the popularity of grave poems like this:   'And when you come my grave to see, prepare yourselves to follow me' and 'Praises on gravestones are vainly spent, a life of goodness is a lasting monument' 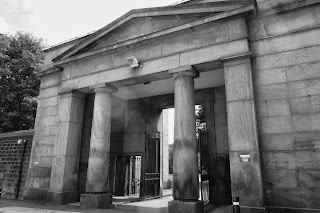 The entrance on Cemetery Road housed the registrar office, the registrar and the sextons. The original plans also included a watch tower but the Anatomy Act of 1832 reduced the need for graves to be watched over to prevent the corpses within them being stolen for dissection so it was decided its additional cost couldn't be justified as it was no longer needed.

The Chapel (which like the grounds was never consecrated so it could be used by any religion or none) was quite unusual in its design as the back wall was made almost entirely of windows to let in as much natural light as possible. It suffered from damp though and in 1857 it was redecorated and a stove fitted to try and counteract the damp and the cold. 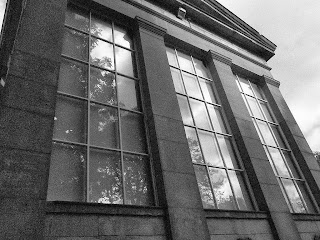 View of the back of the Chapel 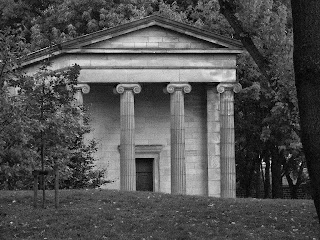 View of the Chapel from the front with hillock made from bulldozed monuments when it                      closed to burials in October 1969 and was landscaped into the garden form it has today.

Its popularity was at its height in the latter half of the 19th century as the owners paid for the installation of privies and a drinking fountain to accommodate all the visitors who came for a walk round its gracefully landscaped gardens and to learn something of the lives of its inmates.

It continued to be a very popular place to be buried til the end of First World War when it began to decline in popularity and there are letters to the local press periodically from the 1920's onwards complaining about the overcrowding and decline of the grounds. It went from a height of 1047 burials in 1863, 1110 in 1918 to just 11 in 1968 and 5 in 1969.

At the height of its popularity it had the cachet of being a private cemetery as opposed to the municipal cemeteries where the people from the workhouse went as one of the worst 'crimes' you could commit in victorian times was to be so poor as to have to throw yourself upon the mercy of the parish.

Plus unlike the church cemeteries it wasn't full of previous graves which had to be reused and it was far removed from the filth and stench of the rapidly growing city centre. But Yorkshire College which became Leeds University was growing up around it and it couldn't expand beyond its existing boundary walls. By the 1950's the bulk of the burials were of those who had either already bought a plot or were being added to existing family vaults.

By October 1969 the university had bought shares in the company from the remaining shareholders and began the process of landscaping it into the form it has today, hundreds of stone monuments were destroyed in the process and a couple of weeks ago I went to the Thoresby Society to look at some slides taken in the last days of the Woodhouse Cemetery which showed the bulldozers in action - but that's material for another post.....

Place and Memory the exhibition which I've been doing all this research for is on at the Holy Trinity Church on Boar Lane, Leeds til Saturday 19th October every day 10am til 3pm.