When I was little my walk to school took me past a graveyard, and the local park where my beloved swings lived also backed onto it. If you stood on the swings and swung high enough - something I rarely did as I was too much of a wuss and I didn't like putting my muddy shoes on the swing seat you could just about see the lines of neatly kept graves the other side of the railings. I was lucky then as I had no experience of grief or losing anyone so didn't understand that what I saw as pretty stones with flowers could be the focus of pain and loss for others and so avoided wherever possible.

As I grew up it was victorian and churchyard graveyards that I fell in love with - with their higgle piggled monuments, crypts, mausoleums and repeated motifs, especially if they were in the process of being reclaimed by ivy and bindweed which I know most gardeners hate but which I think is really rather pretty.

My favourite victorian graveyard in Leeds is St George's Fields which aside from the non denominational chapel and gatehouse has little of its original features left in their original places. I picked it for my place as part of the Place and Memory project - details of which can be found here
It saw its first interment, that of military surgeon George McDermott on the 23rd July 1835 and its last in October 1969 when it was landscaped into the form it has today. It is one of my very favourite places in Leeds - peaceful, historic and slightly hidden away. 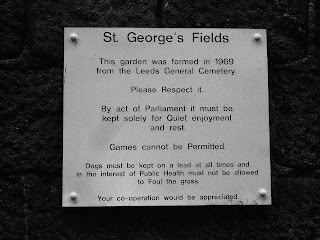 Big funerals and monuments weren't just a way of paying respect to the dead but also how much you could afford to spend on them and there were many changes in funereal fashion over those years. The monuments you see surviving today will have cost a fortune. Then as now most graveyards had a stone mason attached to them whose services you had to use so along with the burial fees it was also a nice money maker for the graveyard owners. Even those who could barely afford anything else scrimped and saved to have their name put on a marker stone with others - dying without leaving a physical mark upon the world regardless of your achievements within life itself seemed one of the worst things that could happen to you - well aside from a paupers funeral or the dissection table that is. 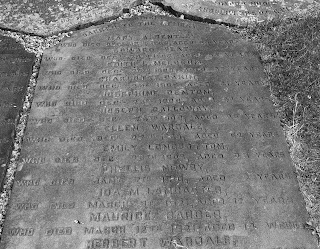 Grave poetry was very much the in thing in victorian times for some religions and I have spent many a happy hour collecting verses from St George's Fields, Undercliffe, Holy Trinity at Meanwood, Lawnswood, Aldborough and here are two of my favourites. They may seem formulaic, trite and mawkish and maybe they did at the time too - as we have no way of knowing whether the people paying those respects actually meant what they were putting on their loved ones graves or if they were bowing to the pressures of social mores and fashion. Many also sought to improve behaviour on the part of the reader and to remind them of their own mortality.


Go home dear wife and shed no tears,
I must lie here til Christ appears
A joyful rising from the grave
So while in the dust I sleeping lie
Do you prepare yourself to die. 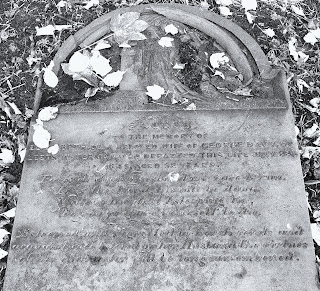 A sudden change I in a moment fell
I had not time to bid my friends farewell
Make nothing strange death happens to us all
My lotto day, tomorrow you may fall.

Place and Memory Exhibition is at Holy Trinity Church, Boar Lane, Leeds from 12-19th October 2013, 10am til 3pm every day except Sunday. Free admission