I've not been up to much this week as somewhat annoyingly I have succumbed to some kind of cough/cold/flu lurgy which put me out of action earlier in the week - though I am fortunate in that I can afford to make an active choice to not do very much at all for a couple of days but it has now made somewhat of a resurgence and has resulted in me having to use my inhaler a lot.

Thankfully though I was able to to rally my forces so I could be fit to go into college for our first 'show and tell' of a piece of our artwork and the second (but first for me) lecture on research methods last week.

And barring one coughing fit which resulted in me needing to use my inhaler I was okay but completely knacked by the time I got home, though I did go via a bookshop on the way home (en route) and bought a book on gothic subculture. First time I've used my student card to get discount too - that felt good and the book has a good overview and catergorisation which I think will help me with my first presentation which I think will be in a couple of weeks......

But in those days when I took things easy I did do a bit of reading  - am most of the way through an Introducing Cultural Studies book, made an attempt to start North and South by Elizabeth Gaskell and I have pinned a lot of links and articles on my pinterest board - some about photography, some about body snatching and I did make a phone call to try and set up an appointment with some morticians too and I have been doing a lot of thinking.....about the differences between observers and participants,objectivity and subjectivity, different types of research and how best to further my studies and just generally basking in the fact that I'd been organised enough the week before to have done all the ironing necessary for the week and that there was enough food in the freezer and some home made soup in the fridge to see us through without me having to leave the house to go to the supermarket. 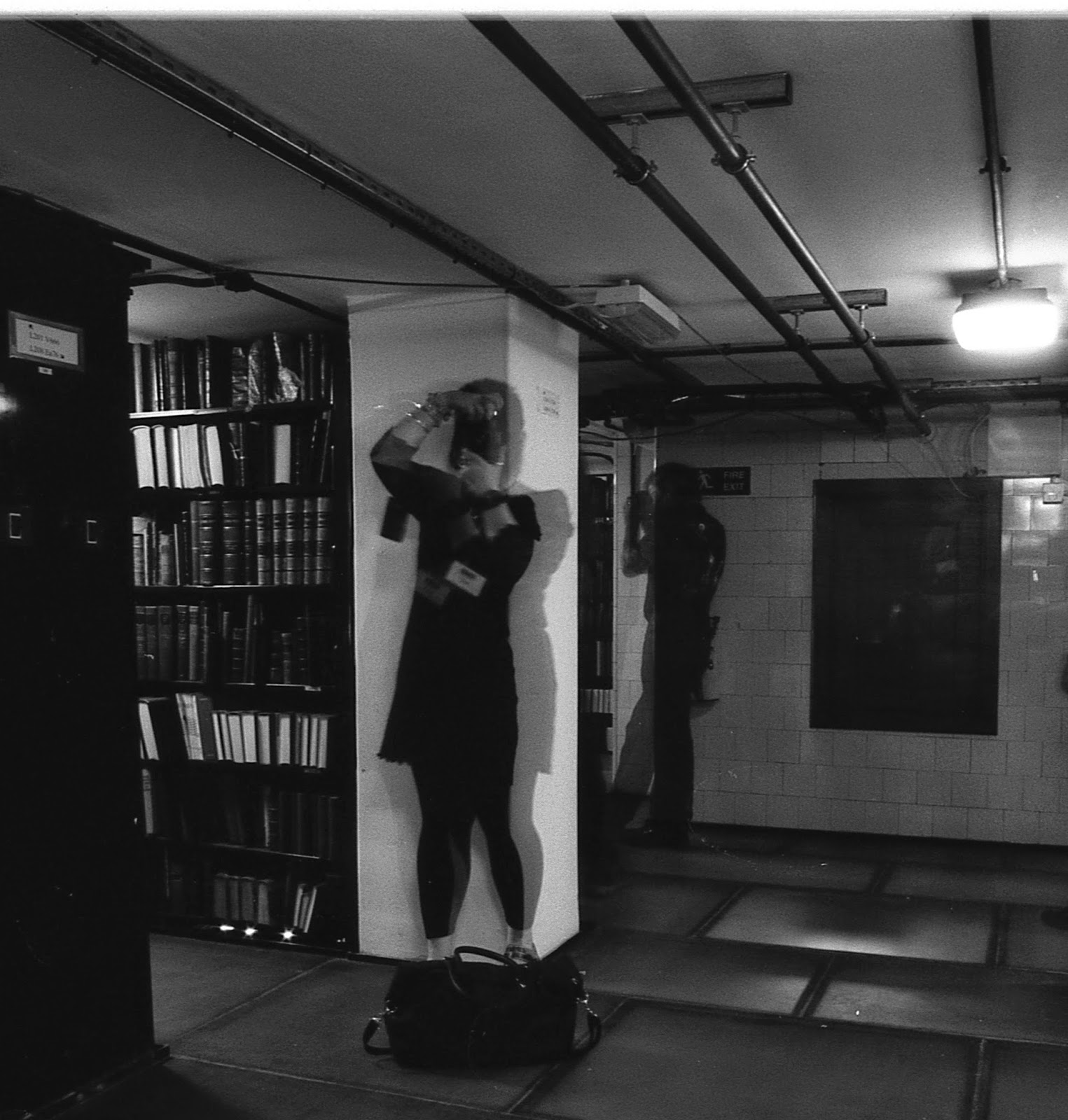 photo taken by husband on b+w 35mm in basement of John Rylands library - somewhere whose archives are on my list to peruse...

I also did quite a bit of knitting - I usually have two types of knitting, one which is easy 'comfort' knitting which I can do whilst watching Corrie, or some other inane but fab rubbish which doesn't take too much concentration - this often takes the form of booties which is handy at the moment as lots of chums are about to have children or more complicated follow a pattern or stitch I've never done before which is done as more of a rewarding challenge. Anyway I now have two pairs of booties which just need sewing up, the start of a cowl and a couple of experimental brooches which may become xmas presents......and I need to keep this up as I find knitting relaxing.....
........but back to academic-ness:

I had a brief chat with my personal tutor and set up one to one times and she said it was good to have thinking time too - especially as I'd been doing a lot of running about in the sweetshop style reading and thinking will help me focus on exactly what it is I both need to do in terms of fulfilling the course requirements but also what I want to do too.

I am still all about victorian death culture, trying to recreate post mortem photographs but also looking to explore more fully the class and death system in victorian times and how much of that still echoes into today.....mmm still got some thinking to do about this and some research and some experimentation and I intend to enjoy doing just that.

My brain did bleed a bit during the research methods lecture though - unfamiliar words and phrases and a general not so much over-thinking of things but what I see as 'over academising' of processes which I find hard - not just because I don't (yet) have that vocabulary down pat but also because I think it can be so exclusive and not for nothing can academics rightly be accused of being in ivory towers....by its nature it excludes those who don't have that vocabulary. My flippant and exasperated  shorthand for this is 'artwankspeak' and though I think you have to be able to speak it - partly because that's the nature of the academic beast and the course I have chosen, but also partly because I think in order to be able to effectively argue against something you have to be able to do it in its own terms and partly because of my own back story and history (meta-narrative if you like) ........but argh it is difficult and cumbersome to learn.

Hmm, like I said though lots of food for thought, lots of opportunity and lots to be doing over the next few days......and most importantly of all I am still loving it :-)

Tasks for this week include:
A proper analysis of Mourning Dress by Lou Taylor
Follow up call to morticians if I haven't heard back from them by Friday
Organise notes made so far into something a bit more coherent
Prepare for first 'proper' one to one with personal tutor later in the week
Get head round the 3 different modules of the course and exactly what is needed for each one.

Not so exciting tasks include: washing and ironing and getting over this bloody lurgy!!