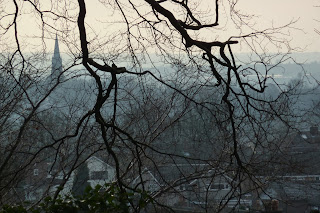 If you live in North Leeds and looked through the trees today you might have seen this, I love mooching about the woods and the bridlepaths and seeing what I can see through and with my camera. This was taken on the digital lumix but I also use lovely old film cameras too - they don't have the screen on the back so you can't check you're getting the view you want as go along so they can be a bit hit and miss and in order to get decent pics you need a sunny day really. I know it's not as quick and easy as digital - but for me that's part of the point. I want to really think about what I'm doing as opposed to just pointing and shooting.

Plus I love the look and feel of film and the tactile relationship you have with it - memory cards aren't anywhere near as exciting or romantic. Plus there is just an indefinable something magical about film, even if it is more expensive, a bit more fiddly and faffy. I love the faff of film though. The click as you insert the cartridge and the slight tension as you line up the holes with the sprockets and wind it on and take the first blank pic before closing the back of the camera and then clicking away  for hopefully 36 times :-)

I like using cameras with a screen but I like using cameras with a viewfinder more, I've got an instant fuji camera that is a joy to use - it's like a big kids camera for adults and whilst it doesn't quite have the proustian instant polaroid noise as it spits the pic out - it's still the aces and it still helps if you put the pic under your armpit whilst it develops.

I haven't developed my own pics for years - I live with two cats and cats and chemicals aren't a good combination so I take them to a nice man in Headingley who does them for me instead - all the excitement of film and none of the resultant chemical faff - I'm not so keen on that side of film. Plus for me there is still the excitement of handing over your numbered papered slip and getting back the envelop containing your images and having a quick scan of the test print and being all giddy and holding up the negatives to the light.

Going back to using film has improved my digital pictures - I no longer click,click,click as film is more finite than a memory card and in order not to waste it you have to really line up your shot, and really think about it before you press the button and fire the shutter. Digital cameras might have fake electric shutter noises but nothing beats the noise and feel of the real thing.

I know we are in a digital ever quickening revolution but LONG LIVE FILM!!!