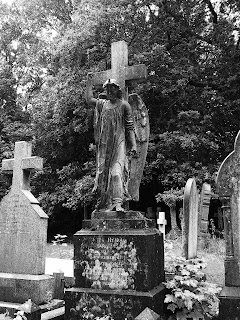 picture of rather lovely angel topped grave taken yesterday
Yesterday courtesy of Friends of Lawnswood Cemetery I went on a guided walk and talk round some of the graves of noted medical men interred there. The rain added to the atmosphere really and it was an enthralling and intriguing way to spend a sunday afternoon.

The talk was a mix of biographical detail of each of the internees and a brief overview of the development of the medical profession, and of the hospitals and school of medicine we have in Leeds today. Many of the internees for instance spent time working at the Hospital for Women - now long since gone.

The rain was really quite heavy as we were walking around the graves and so against the sound of rain dripping on the leaves and on the umbrellas we were treated to the tales of various medical men - some surgeons, some doctors and some pioneers in their field.

Two of the internees stood out for me  - Max Louis Rossvally and Thomas Scattergood. Sadly I don't have pics of their graves to show you as the rain was so heavy at this point I wouldn't have been able to take a decent picture but I can tell you a bit of what I remember of their stories.

Max Louis Rossvally 1828-1892 somehow came to Leeds from New Orleans and he converted to christianity from orthodox judaism after treating a drummer boy called Charlie Coulson ho had been badly injured leading a contingent of soldiers in battle during the american civil war. He needed both an arm and a leg amputating and it seems he refused the offer of alcohol or chloroform to help through the amputations - preferring instead to rely on his faith in Jesus. Rossvally was so struck by this he decided to convert, was seemingly disowned by his family as a result and somehow came to Leeds. His wife who outlived him remarried and became the landlady of the Black Bull pub in Horsforth. It also seems he was recruited as a spy during the civil war though there is confusion over which side he was actually spying for. He was also an altruist and founded a clinic which gave free food and treatment to those who could not otherwise afford medical treatment. Charlie Coulson unsurprisingly died five days after the amputations.

Thomas Scattergood 1826-1900 was a big cheese in the field of forensic medicine and was instrumental in the case of Mary Ann Cotton  1832-1873, the infamous serial killer from County Durham who was found guilty of poisoning her step son. But it is also alleged that she also murdered other members of her family including 4 husbands, her mother, her sister, and her biological children with arsenic. Her local doctor after officiating at yet another death due to 'stomach fever' decided to send the stomach contents to Scattergood for analysis. Scattergood found arsenic which lead to exhumations of her other victims. She was found guilty and executed - though whether or not she would be today with advances in both forensic medicine and judicial practice is an interesting question.

Friends of Lawnswood Cemetery organise a number of guided walks and events throughout the year and you can find all the details on their website http://friendsoflawnswoodcemetery.co.uk/